Many people spent Sunday night watching Super Bowl XLVII, some refer to it as the Beyonce Concert, and others enjoyed the host of commercials.  The game was packed with action, and I am happy to say I won a friendly wager with my brother, as I was rooting for the Baltimore Ravens.  As Ray Lewis had Psalm 91 (my favorite psalm) written on his undershirt, and proudly stood with his victory Lombardi trophy, knowing this would have been his last season at the game, everyone was pleased to have watched a thrilling game.  Even the power-out had fans on the edge of their seat after half-time, as players stretched out in janu-sirsasana. 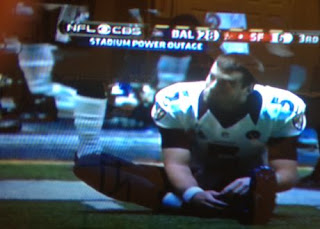 Alicia Keys who performed the soulful rendition of the American national anthem shared with her twitter fans ''Jus finished a beautiful, calming yoga session. My intention is 2 enjoy every piece of this special day! What's urs? (sic)'' prior to her performance.  The halftime show, Beyonce concert, or Destiny's child reunion (whatever you chose to call it) was also a highlight for many fans.  The incredible and electrifying guitar solo by Yogi Bibi McGill was another reminder of how many ways Yogis are sharing their light and vibration.  Music has a powerful way to heal, inspire, resonate with people, and unify....congratulations Yogi Bibi for taking over the amazing half time show with your killer guitar riffs!
Posted by Ambria of riya yoga at 12:31 PM