Was Jesus a Yogi?

After the weekend that marks one of the most celebrated weekends in the Christian Calendar (Easter), which commemorates the Death and Resurrection of Jesus Christ, some people wonder if Jesus was a Yogi.  Some people wonder why we call it Easter, when it is referring to the Pagan Goddess Ishtar goddess of fertility/love/war and sex who was often depicted with rabbits and eggs.  The purpose of this article is not to debunk the efforts of Constantine in 4th Century AD when he combined the 2 festivals of resurrection & Ishtar to draw more Pagans to the Christian movement, or to have people avoid eating chocolate eggs or bunnies, but rather to ponder if Jesus was a Yogi? 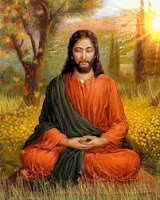 The question can arise from both Yogis and Non Yogis often creating division and emotional reactions.

You could have some fundamental Christians who may condemn the practice of Yoga and therefore engage in the “judgment” or “biblical stone throwing” (John 8:7), towards those who practice yoga.  Then there are the super hippie Yogis of today (some may consider modern day Constantine’s) who cling to their yoga pants, cult worship of their favorite “style” of yoga/teacher, and chastise the thought of believing in Christ because it conflicts with their spirituality.

Perhaps we should focus on the message of Jesus and the essence of Yoga (as highlighted in the Hatha Yoga Pradipika or Yoga Sutras)? One is the Prince of Peace, the other is the practice of Peace.....let's explore with that common thread in mind.

Some may point out that Jesus was prophesized in the Bhavishya Purana, which is considered to be one of 18 Puranas of the Vedic Canon.

Many refer to the teachings of the incredible Yogi Parahmansa Yogananda from his books “The Yoga of Jesus” or “The Second Coming of Christ” where he compares the Yogic Mindset to that of Christ Consciousness, he draws a parallel of the 7 seals in the book of Revelation to that of the Seven Chakra centers.  He like many scholars have brought to light their belief in the travels of Jesus that were unaccounted for in the Bible, as leading him to India, Tibet and immersing in the practice of Yoga. 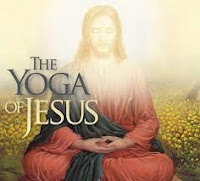 So again the question arises, was Jesus a Yogi?

What is a Yogi – By definition a yogi is a practitioner of yoga.

What is Yoga – The Union of the mind, body, and spirit.  It takes its journey through 5 paths; Hatha (postures & pranayama), Bhakti (devotion), Karma (Selfless service), Jnana (knowledge through study), and Raja Yoga (royal path of meditation & control).

Within Raja Yoga, Patanjali refers to the 8 Limbed practice in order to achieve Samadhi.  All 8 Limbs can be achieved for those who abide by the Golden Rule that Jesus shared.

Jesus never came to abolish the previous Laws (10 commandments), but to make a new one, an umbrella or summation of the previous laws.  The amazing connection is The Golden Rule is also a summation of the 8 Limbs of Yoga.  Here are some scriptural references for just the Yama’s & Niyamas (limbs 1 & 2) as related to the “Golden Rule”.

We all can aspire to be “yogis” when we abide by these ethical rules, which are summed up in Jesus’s Golden Rule.

While one could find a Biblical reference to point out in favor or against the concept of Jesus being a Yogi, all in all his message was Love & Forgiveness in order to achieve the Kingdom of God or Spiritual Liberation, which Jesus said is within us (Luke 17:21), is much like the goal of Yoga.

In the Yoga Sutras, Patanjali refers to this liberation or goal of yoga as:

योगश्चित्तवृत्तिनिरोधः ॥२॥
yogaś-citta-vṛtti-nirodhaḥ ||2||
When you are in a state of yoga, all misconceptions (vrittis) that can exist in the mutable aspect of human beings (chitta) disappear. ||2||

While we may not have proof of Jesus doing Scorpion Pose, and we know for sure he did not wear LuLu Lemon, we do know that his message was that of Love, forgiveness, peace, humility, compassion, discipline, faith, and ultimately Spiritual Liberation (the goal of yoga).

To my Jewish sisters and brothers who celebrated Passover, and my Christian Sisters and Brothers who celebrate Resurrection/Easter Weekend, I send you all love.  Eat some chocolate, do some sun salutations and live a life with Love & compassion for all.  Namaste
Posted by Ambria of riya yoga at 5:08 AM