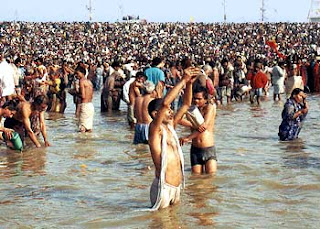 Kumbh Mela 2013 is one of the biggest Hindu Pilgrimage and festival in Hinduism from January 14 - February 3rd.  Pilgrims gather at the sacred river to bathe and purify their souls, and cleanse from sins.  It happens every 12 years.  The last Festival had an estimated 70 million participants and this current one is expected to have over 100 million participants.  People come from all over the world, to bathe in the sacred rivers, to witness the Sadhus (dressed in orange), naga baba's (naked as symbol complete aparigrapha), yogis,  and other devotees immerse themselves in this sacred ritual to cleanse their souls and purify from any negative energy. 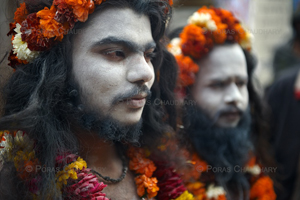 The river Ganga-Yamuna and mythical Saraswati are said to hold the necatar from the Kumbh (pitcher) of the Gods after the seas were churned.  Aside from witnessing the mass baptismal like purification of Hindu devotees, people who participate enjoy spiritual discourses, devotional kirtan, and feeding of many people (holy people and poor).
Posted by Ambria of riya yoga at 5:12 AM