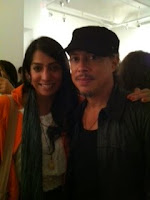 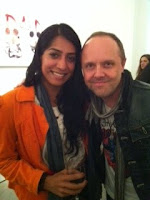 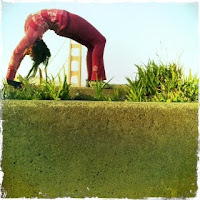 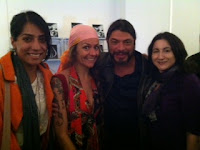 So while I have been so busy these days and unable to keep my blog up to date, I still need to share the awesome experiences that I am so grateful for. In December of 2011, one of my dearest students, Stephanie, who became who became a certified Yoga Instructor last year with me, invited me to join her in San Francisco. Ironically, I have always wanted to go to San Francisco, and I had a feeling many months prior that one day I was meant to take a trip with Steph, but I wasn't sure when that would be. While I feel so much gratitude for the amazing Love I have received from so many students and fellow yogis throughout my years, how lucky am I to be invited to go to San Francisco??? WOW. Thank you so much Steph!!! Steph had won a chance to see Metallica for their 30 year anniversary concert series for members of the fan club only, and Steph chose to bring me, I was her Plus-One. This was a Metal ROCK event of a lifetime, with artists like Ozzy Osborne, Kid Rock, Apocolyptica John Bush, and Dave Mustaine just to name a few sharing the stage. The concerts were not like regular giant stadiums, these were intimate events at the Filmore, where the band chatted and joked with adoring Met Club fans, Collective Consciousness of "Metal Mudras" were all around in the air, and just awesome vibes.
Though I knew Metallica's music, I was never claiming to be a serious fan before, I now have a new appreciation for their music....THESE GUYS ROCK!!! Steph knew I would appreciate the experience being that I am a musician myself. Before venturing to San Fran, Steph also invited me to a Meet & Greet Event where I met the members of the band and a few other celebrities, sharing casual conversations with Lars, Kirk and Rob.....I was so impressed with how down to earth these guys are.
We had the intention to do daily Yoga in San Francisco, and unfortunately I had 4 days of fever due to a Healing Crisis from an amazing Reiki Certification I had conducted with Joseph just days before. It did not stop Steph & I from having fun, exploring the gorgeous city of San Francisco, meditating and doing Yoga at the gorgeous Golden Gate Bridge, riding trolly cars, getting Wheat Grass shots in the Castro District, Shopping on Haight Ashbury Street, lounging at the Warf, visiting a gorgeous Crystal Store, seeing everything on our list & more, and enjoying 4 of the most AMAZING Concerts I have ever been to.
This post is to express my gratitude to Steph (my student, my friend, my fellow Yogi) for inviting me to San Francisco with you. It was such an awesome experience that I will forever cherish.....a trip that will be hard to ever trump! And also tremendous gratitude to my amazing Yogi friends Jen & Dan at Yoga On Studio who had invited me to Teach a Workshop, thank you so much for the invitation, next time we will have more time to connect and it will be amazing!!! Thank you also to Metallica for giving me the music experience of a lifetime!!! You guys really know how to put on an awesome show!!!
Pictures:
Posted by Ambria of riya yoga at 6:53 AM