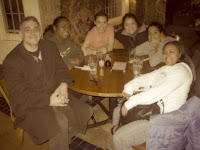 This Sunday morning I had the desire to take the class of my fellow Bamboomoves Yoga Instructor and friend, Carissa. I have taken Carissa's class before, and it is a lotta fun. Normally, my Sundays were booked, but since we are starting into a New Year the Holidays have extended for some....which meant I can take class! YEAAAA!!! I thought I would try Zumba for the first time, but I had things to do, so decided to make it for the 12:30 yoga class. I head down to the Bronx, and class had started???? The class actually starts at 12. I roll my mat out next to the door and flow through with the rest of my students while Carissa leads us in an awesome class.

After class we decide to head to the city to get lunch. We start to list some yummy Vegan places we know, and eventually decide on Angelica's Kitchen. Angelica's Kitchen is an awesome Vegan Restaurant! We feasted on yummy corn bread, delicious soups, steams veggies, and more!!! Sharing laughs, fun we discussed the famous Vegan Pumpkin Moonpie that Carissa had bought for me last Thanksgiving, which I was unable to eat/enjoy due to a fast, and she graciously ate for me. This discussion prompted the decision to go across the street after dinner to Cafe Viva to get the Moonpie. So after diner we glanced at the desert menu, and then headed across the street instead. I knew I was going to try this delicious desert that everyone seems to be salivating while describing to me. It was not there!!!??? So Carissa tells us that Atlas Cafe which is maybe 5 blocks away outsources the moonpies, and while they never carry the pumpkin moonpie, they have other Vegan deserts. So we head down there, everyone is enjoying the cool weather, excited about desert, and I have it in my mind that I will taste this moonpie TODAY. We walk in, and TADAAAA!!! It's there!!! I bought two, one for me and the other for Michele. Veronica and Ricky bought some other sinful Vegan Deserts, and we all share the treats, and moan in heavenly gratitude!

For many people going Vegan or Vegetarian is a New Year's Resolution. Some people also have made the choice to have a more conscious dietary lifestyle, or even just to reduce the intake of meat. People sometimes worry that there are not as many options for eating out. While it may be true for some cities, in NYC you have plenty of options, and Angelica's Kitchen is one of the many wonderful choices! Also, some feel like they may not have the sweet tooth indulgances they enjoy, well let me assure you Vegan deserts are BETTER!!! On the way home, I was talking about how growing up I never really liked eating sweets, except my mom's chocolate cake or banana bread and my Aunt/Godmother's (who is from Austria) Christmas Cookies. Ricky stopped at some random Vegan Yummy place and brought out a Vegan Linzer Cookie, and it was actually yummy!

Choices are available, and food sources are rich in taste, vitamins, minerals, and goodness. If you are planning on making the switch it is important to educate yourself. We at Bamboomoves will be hosting our 21 day to wellness challenge in this new year, but there are also books available too! Happy Healthy Veggie Eating!!! Thank you Ricky, Veronica, Carissa, Michele and Latesha for sharing in a lovely healthy lunch!
Pictured: Ricky, Veronica, Carissa, Michele, Ambria, Latesha
Posted by Ambria of riya yoga at 6:07 PM