Yoga at Pure with Marco Rojas 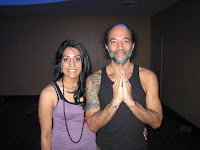 My amazing yoga student Al invited me to join in three days of fun yoga at Pure. While we loved class with Matt, we heard that we should take class with Marco Rojas. Marco teaches Vinyasa 2, and apparently the class is usually packed and extremely popular. I had heard about this particular instructor before and was eager to take the class. While I was considering taking a class before the Vinyasa class, I enjoyed my sleep and showed up in time for Marco's class. I situated myself at the back of the class again, and stretched out in silence. In walks another student who asked me if I had ever taken Marco's class before, and I said no. Slowly the other students begin to trickle in, and in walks Al. I knew that I would have to modify a lot, since my toe may not be able to transition through a level 2 Vinyasa class, but I was excited and grateful to take class nonetheless. In walks Marco, he is a tall lean yogi, salt and pepper hair, beautifully tatooed arms, commanding strength, with a kind spirit that echos in his Latin eyes and a charming smile. I jump up to greet him and explain that I am recovering from a broken toe. I asked him if it was alright that I modify, and he was so happy to hear that I wanted to modify rather than sit and watch. The class size was not as big as I had anticipated, and also Marco noticed that, so he asked the students to slide the mats to the walls. He introduced his lovely assistant Veronica and began the class. He taught the most amazing yoga class, keeping us in poses for a very long time, emphasizing the importance of awareness of dual forces in the body/spirit, and having us in multiple inversions. I am so grateful to have taken this class, as Marco made a point to adjust me in almost every Handstand variation he taught. I felt very blessed! One time when I was upside down in handstand, he was assisting me and had his hands on my hip bones, it was so ticklish, I had to come down and get the giggles out. I told him how I had broken my toe by landing wrong in a series of handstands, but it did not stop me from enjoying every handstand in his class. When I say every, I think he had us in at least 10 handstands by the end of the class. It was absolutely awesome! He is extremely dynamic when he speaks, which I loved! His assisting and demonstration of poses was spectacular! He is clear with his cues, charming, and at times funny. Many of the students would laugh off the sweat when he would remind us that we would be holding the pose for 4 more breaths. He also had a familiar way of expressing his views on energy, and after class when I thanked him for class he told me he has studied with Alan Finger. Aha!! That is the familiar essence I was picking up. Alan Finger is an amazing renowned Yogi (founder of Ishta) and original founder of Yoga Works who combines energetic awareness, Ayurveda and yoga in his classes. Marco is a remarkable teacher who I would love to take regular classes with, he is truly wonderful. Thank you Marco for an awesome class!
Pictured: Ambria and Marco
Posted by Ambria of riya yoga at 6:47 AM