During my travels in India I have had the pleasure to study with some brilliant teachers. India has been the place where people come from all over the world to learn ancient systems of knowledge. For centuries the biggest producer of both Allopathic, Ayurveda and Homeopathic medicines are from India, due to the land rich in natural herbs and plants. The one thing I realize after my months in India, there is a special authenticity when you learn from these Indian Gurus, that leaves you eager to learn more and leaves you deeply humbled by their wisdom. While in the Western part of the world Yoga has turned into a method of exercise where a quick course gives you the title of Yoga Teacher, here in India, the awareness of Yoga is in their essence, life long devotion to the practice, family lineage and humility. Here Ayurveda (the science of Life) is the natural way of living. While in Kerala my family home is surrounded with various plants that are ayurveda remedies that have been handed down from my great great grandparents. I was suffering with a health set back while in North India, and when I returned to Kerala, my aunt whipped up some leaves that helped tremendously.

Ultimately both Yoga and Ayurveda are systems designed for higher consciousness which can only be achieved when an individual is disease free. The wise sage Patanjali says: purusarthasunyanam, gunanam pratiprasvah kaivalyam svarupapratistha va citi saktiriti (KAI PA. 4.43)

Which translates: Yoga takes us to the portals of consciousness beyond the mind.

Many gurus here in India teach how proper practice of Yoga, daily pranayama, proper diet, and ayurveda is a natural system that eradicates disease. After weeks of illness, I realized had I maintained my daily pranayama practice, my health situation may have been a little different.

This trip has allowed me to deepen my understanding by more in-depth studies of Yoga, Ayurveda, and recently Thai Yoga Massage. As I have years of study and experience with Body Work Modalities like Yoga, Shiatsu, Ohashiatsu, Reiki, Lomi Lomi, and Ayurveda Massage, this course was a beautiful addition to my list of things to share. The course was an intensive course with world renowned Ram, from Om Yoga Ayurveda. We learned the history of Thai Yoga Massage, the sequence, the stretches, the points, ayurveda, mantras and much more.

Many people would assume that Thai Yoga Massage was created in Thai Land, however, the system was originally developed in India by Dr. Shivag who was close friends and Doctor for Buddah. When he returned from Thai Land, he found some literature that helped him develop this modality that we now call Thai Yoga Massage. We learned the creative sequence that much like the modality of Ohashiatsu, leaves both the "giver" and "receiver" feeling wonderful. We learned important points and meridian lines on the body. 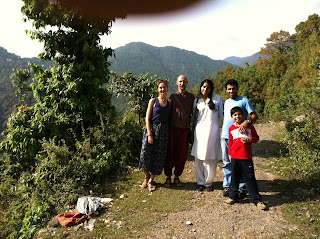 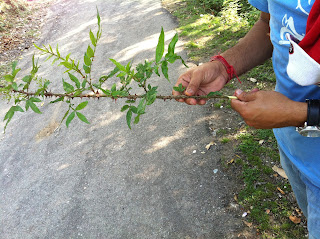 The best part was we learned so much about Ayurveda as well. Ram is an amazing teacher.  Himachel Pradesh is a region of India known for it's mountains, so one day as a treat, we walked down the mountain to Dharmshala to go to Baba Ram Dev's Ayurveda store. During our hike, Ram explained in depth many of the plants, herbs and flowers and their Ayurveda benefits. One herb very similar to the Jamaican chew stick, but here in India we call it ThiraMira. This stick is said to make your teeth strong, and it's little seeds are like bursts of licorice and mint in your mouth. While I am now officially Thai Yoga Massage certified, I am looking forward to learn more, to practice more and share this beautiful modality with people. Thank you to Ram, Shankar, and my wonderful classmates (Chris & Julia) for making this a wonderful experience.
Posted by Ambria of riya yoga at 9:10 PM