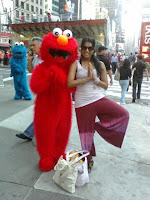 Years back when I worked at Def Jam, I used to have to walk somewhere through Times Square area. It is actually beautiful to witness the lavishly lit buildings, the billboards, and the energy of Times Square. While it was once part of my daily commute, I am happy to say I have enjoyed the detoxification from the experience. Since I prefer walking through streets without dodging other pedestrians, I tend to avoid that area of Manhattan. Until recently. In efforts to maintain my status of Worlds Coolest Aunty, I decided to meet Elmo and maybe do some Yoga. While on my commute from one Yoga Session to the next, I ventured through Times Square, and there he was, ELMO. He gave me a Big Hug, so big that I was almost lost in a sea of red fur, which is when I decided maybe now we should do some Yoga! I attempted to teach him Tree Pose, but he decided to just have his hands in Anjali Mudra (saying Namaste)....and wouldn't you know, there was Cookie Monster, peaking behind us, putting his hands in Namaste too! Like for most folks, yoga is something everyone loves! Even Elmo and Cookie Monster!! Namaste Sesame Street!
Posted by Ambria of riya yoga at 6:07 PM