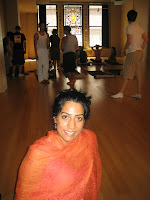 After many days of shuttling around from teaching yoga sessions, and singing in the studio for my various music projects, today I had the chance to use my passion for Yoga and performance in a different way. Today, I spent my morning with a delightful group of people at the Jivamukti Yoga Center, NYC. The yoga studio was the backdrop for a scene in a TV Pilot called Shala High. The concept is wonderful, so I am very thrilled to be part of this pilot! The cast, including myself gathered together for a Yoga Class, and filmed what would usually be the first intro to Sun Salutations (a minute) of a Yoga class, only for filming sake, the scene took a little over 2 hours. So basically, 2 hours of Down Dog, Plank, Cobra, and a few Warriors here and there. It was too fun! There was a wonderful energy in the whole group! The director is also a Yoga Instructor. At the end of filming, I quickly had a fellow cast mate snap a picture for me. I'm keeping my fingers crossed that such a lovely show gets picked up. With the growing attention to the yogic path to enlightenment, it is a great way to bring this positive energy to the mainstream, and I would love to have more opportunities to be part of the cast! Happy Labour Day! Peace & Hugs ~ Ambria
Posted by Ambria of riya yoga at 11:36 AM