Day 13 - Meditation with Mantra for Healing

While the ancient yogis used mantra to bring healing, increase vibration, and create balance in the body.  The power of our words is extremely powerful.  Often times people do not want to recite Sanskrit Mantras because of various reasons, which is actually good because sanskrit mantras truly only have power when said correct.  The Concept of Mantra has been since adapted by many Western Teachers including Louise Hay, Milton Erickson, Richard Bandler, Wayne Dyer, Deepak Chopra, Tony Robbins, and many others including a French Psychologist named Émile Coué de la Châtaigneraie. 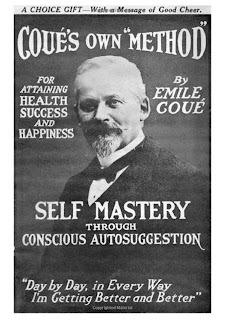 The mantra suggestion for today is made famous by this French psychologist, who noticed a massive impact this phrase had on his patients.  Many Doctors today use this phrase with their patients and notice that it lift spirits and alter chemical levels in the body.  Coue used this to invite his patients to the power of hypnosis, which meditation ultimately is.  He would refer to this technique as a way to have his patients trick their bodies. The important aspect of meditation is that we need to meditate on positive things, words, music, etc.  Our unconscious mind will absorb anything and everything, so when we counter strike this world we live in that bombards our unconscious with subliminal messages in all forms of media designed to create fear, jealousy, discrimination etc., we are raising our vibration which brings healing.  Anytime we focus more on Faith, we are inviting more positive experiences into our path.  Coue treated many patients and claimed a 93% success rate, the 7% of people refused to believe in his mantra and were skeptical.  For those who want to try a new approach to mantra, or help a loved one, recite this mantra every morning for 10-15 minutes (WITH FAITH), and perhaps you will be part of the 93% success rate.

Posted by Ambria of riya yoga at 5:19 AM