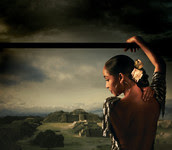 Every week the people of Bamboomoves line up there yoga mats and are ready for class. The devoted regular people usually have their favorite spot, and are prepared to sweat and deepen their practice. Since I am a musician first, I believe in the importance of music. From a yogic perspective we are all made of vibration, our chakras are all awakened with certain tones and this is another reason why music has such healing abilities. This is a Science that today in the West is regarded as "new" alternative treatment called "music therapy" while in the East, for centuries, the Yogis understood how music has the power to heal, hence, the reason for our Om and various other chants done on specific notes. Normally I provide a play list of songs that flow through some Indian Classical music, chants, and a variety of soft rock/pop songs by popular musicians that I enjoy like Norah Jones, Sting, Anoushka Shankar, John Legend, Alicia Keys, Dixie Chicks, Coldplay, Bob Marley, Lenny Kravitze, Sade, and Ambria (myself of course.....I figure I have a captive audience so I include some of my original music on the play list) and many more artists. Well, this Saturday, one of my devoted adult yoga students, Martha, mentioned how she has the new Sade album, (me too, I am a HUGE Sade fan, LOVE the new album) and said she would let me borrow it to use in our class play list. She gave me a brilliant idea, and I just played my "Sade" play list on my Ipod. In the past I veered away from doing this, because I feared I would forget that I am the teacher, and just start singing along, but class was awesome, and I saved my singing along till when we were all on the floor doing supine stretches. When the song "King of Sorrow" came on, ironically we were in an intense pose, so I made sure to point out the irony of this, which brought a nice chuckle to the group. Sade is number one after years of what many fans looked at as retirement, only to return with an awesome new album at NUMBER #1 on the charts, as a HUGE fan, I am not surprised. From a Yogic perspective, her music touches upon all aspects of love which opens the heart chakra, and tonally, in my opinion the vocal and instrumental frequencies resonate at a chakra level.
Both my 9:30 level 2 Yoga class and the 12 noon Yoga level 1 yoga class had a tougher class this week, as I took it up a notch, so I was very impressed with how many of the budding yogis returned for the 4pm Yoga-laties class, which was another sweaty challenge. As the title of the blog was "Sade at Bamboomoves", I could only dream that it would happen, instead her music just filled us with inspiration for our class. Sade if you ever read this blog, I LOVE YOU! Did I mention, I am a HUGE fan....If you want a Yoga session, I am your girl...better yet, I'm "By Your Side" as you sing in your song, and while you have the coolest band EVER, if you need a background singer or even a tambourine player....call me :) ~ Peace & Hugs, Ambria
Posted by Ambria of riya yoga at 12:30 PM