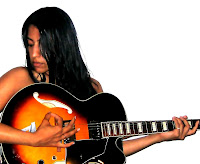 So, the first time I was exposed (figuratively and literally) to Naked Yoga, I was a participant in the class.  It was an eye opening experience.  I was amazed by the overwhelming sense of humility and vulnerability, which was all ushered in with the guidance of the brilliant Isis, of the Phoenix Temple here in NYC.  Being a Yoga Instructor and a musician, I naturally engaged in conversations with both Isis and the lovely Bass player.  As soon as Isis found out that I am also a musician, she graciously invited me back to participate as a musician.  While I was reluctant, I agreed.
As I pledged to immerse myself in all avenues of music and Yoga, I decided to face this new challenge.  So, fast forward to Memorial Day, 2009.  I am having a fun afternoon with a friend, and reluctant to play for the class.  Once again, the natural intimidation of nudity for this tenderly prudish girl arises.  However, I venture on the train dressed in a beautiful white dress, with my guitar and Bansuri (Indian Flute).  I had not practiced or prepared anything to play for the yoga class.
I enter in and meet with Isis.  Once again, her energy and bubbly personality put me at ease.  The class is an intimate group of four students.  I am situated at the front of the room on a large cushion, beside Isis who is seated on her yoga mat.  We are guided through our opening meditation and in the customary manner we remove our clothes.  I begin to play the flute, Raga Yaman, as best as I can with some colorful improvisation and long haunting notes while the class starts the initial warm up.  Slowly I progress to my guitar, singing and playing some renditions of my own material, a collection of my love songs.
The energy transfer between myself, Isis, and the class was something out of this world.  I can only say that every note I sang and played was guided by a force beyond the room.  This was an experience similar to a Jazz ensemble that plays a standard for the first time together, improvises and takes the listener to a spiritual dimension that has not been visited.  I only wish that I had set up some sort of audio recording device, to have captured the beauty of the evening.  It left me with a brand new experience, and also a soft, sensual new acoustic version of my songs.  This was the most unique gig I have ever played so far.  For more information or if you are brave and would like to participate in Naked Yoga visit:http://www.nakedyoganyc.com
Posted by Ambria of riya yoga at 7:50 PM