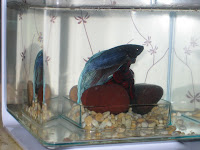 A month ago, I walked into a pet store and was so impressed by a gorgeous Betta Fish. He swirled and swished his glorious tail in his tiny vase, and seemed to look straight at me as he danced around. I was captivated by his long veil tail, and energy, I bought him. I named him "Kutta" which is short for Kuttapan, and the name apparently means "good guy" in malayalam. My roomate quickly became attached to the fish too, and one day, while he was "fish sitting" Kutta jumped out of the tank. Unfortunately, Kutta jumped when no one was around, and an hour later was found on the ground. Amazingly enough.....this little fish is fine! He was put back into the tank, and swam sluggish for sometime, and now with some TLC, he is back to his dancing self. Yea for Kutta! He is a true survivor! Betta fish can survive out of the water because they breathe through their mouths unlike most fish who primarily breathe through their gills. Now, I have moved to a lovely new place, and decided to give Kutta to my former roomate, as they have obviously bonded from this near tragic event. While I will miss Kutta, I know he is in good hands. Just watching these wondrous creatures swim around in their tanks is one of the most glorious forms of meditation. Yeaaa for Betta Fish!
Posted by Ambria of riya yoga at 8:51 AM