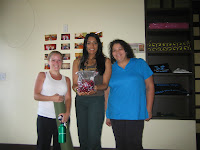 Twice a week the yogalaties fan pack Bamboomoves to endure my sweaty take on fast paced vinyasa yoga, pilates, and various core exercises. One of the key exercises in this high energy class is "cherry pickers". It is the exercise everyone loves to hate. This past Saturday despite our record high heat in NYC, the Bamboo folks came out to Yoga 2, Tai Chi, Yoga 1, Belly Dance, Kick Box and of course Yogalaties.
In the middle of my break between yoga classes, our new Belly dance instructor decided to pull me into class (out of the lobby) to do a fun, impromptu shimmy with her. The class was clapping, laughing and enjoying watching me shake my booty. Many of the folks at Bamboomoves don't know that I used to belly dance in some venues in the city, and based on my somewhat goofy performance with our amazingly talented new instructor, they probably still don't know. Thank you Joy and Jody for encouraging Kristi to pull me into the class so you could stand by giggling! No really, thanks ladies!
Fast forward to the later part of the day and it's time for Yogalaties. The heat did keep some people away, but most of my dedicated folks came with smiles on their faces. Standing in front of me with something clearly behind their backs, and suspicious grins on their face, two lovely participants (Amber & Michelle) presented me with a delicious bag of cherries!!!! A bag of cherries in honor of "cherry pickers". I burst out into thankful laughter! They were hoping that the gift would inspire a class without "cherry pickers", but instead we did it twice. The funny thing is, I have incorporated another exercise that I call Melon twists (watermelon, cantaloupe, honey dew, whatever melon you like) and the big joke is, who will bring in melons for me next week. After knowing that we did extra cherry pickers, I think it's safe to say I won't be getting any melons.
To keep up with the impromptu energy of Bamboomoves, our gorgeous Kick Box instructor Leon peeked his head into the yogalaties class. He noticed some of his students ditched his class for mine. I invited him in and asked him to teach the class something. I held his hand, led him to the front and I said anything at all. The participants in class were smiling but slightly apprehensive. Leon proceeded to lead them into an exercise I know as "Dive Bombers", usually done in the military. It's similar to a Hindi Push up, only legs are really wide apart, and you dive upper body forward, down and back, ducking your head under an imaginary bar. I was so thrilled because for weeks, the class is doing "hindi pushups" as the "warm up" and it is harder than a dive bomber, so they were ready to do Leon's exercise challenge. All in all Saturdays are great energy at Bamboomoves, and I am especially thankful for the yummy bag of cherries!
Posted by Ambria of riya yoga at 8:18 PM