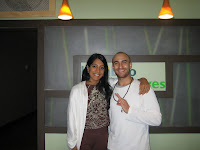 Good morning Monday. Off I go for the early 7am yoga with Isaac at Sankalpah. My body was a little tired due to a weekend of 4 yoga sessions I teach on saturday (one of which is referred to as "torture") and 3 on Sunday. Nonetheless, I was grateful to be there. Drenched in bliss yet again. Stripped of my ego, as my legs and arms were shaking throughout the class. Then off to Shiatsu practice class, and then teach a few yoga sessions. Fast forward to the later part of the gloriously hot summer day and I am at Bamboomoves. Finish teaching the kids yoga class, and watch Milta (the first yogi of the month) in her sparring class upstairs at the Karate school. When bzzzzzz (the vibration of my cell phone) Andrew is stuck on the train at Park Slope and would like me to lead the start of the 7:45pm yoga class. Sure I said. I head downstairs, lay out my mat, jokingly introduce myself as Andrew Tanner to a class of all familiar faces who laugh at every one of my silly jokes (thanks guys for being a captive audience to my budding comedic talents) and let them know he is on his way. Some of the students thought I was teaching, as I have subbed a lot for Andrew in the past. As I was starting the meditation, in walks Andrew (my yoga brother from another mother) and I casually move to lay my yoga mat on the side between Jody and Denise. Early on when I met Andrew, he told me my only flaw as a yoga instructor is my Headstand practice lacks strength. I LOVE IT, because I agreed and I am working on it. Andrew is a brilliant yoga instructor. He is a Dharma Mittra disciple, and gives a wonderful yoga class. He led us through a terrific yoga class while my gentle cloud music on my iPod played in the background. My arms were kinda sore but he had me up in forearm stand up the wall and various other poses. Did I mentioned that I was sitting next to Jody? Well Jody makes me laugh, a lot! I love to laugh, so choosing to lay my mat next to Jody, who already makes me laugh, and I am already pretty giggly, well, let's just say it was a giggly class. Before Andrew requested us to get into plow pose, we were both giggling because we had gurgling tummies. Luckily, Andrew gave a variation. I am a big fan of Andrew Tanner, he gives a complete classic yoga class (asana, meditation, pranayama and more). It echos of Dharma style with Andrew's own genuine witty one liners. The best is how he leads the class through a good sweat, and proceeds to say "now that we are through with the warm up" which is always well received by sweaty confused lifted eyebrows. He introduced us to "bouncey ball asana" his own creation to open the sacral area, it was pretty fun! Andrew was the original founder of the quickly growing Bamboomoves chain, and teaches at various Bamboomoves locations, as well as Dharma Mittra studio on occasion. Andrew is another NYC yoga teacher that I respect and revisit. He gives wonderful cues, helpful assists, demonstrates awe inspiring variations, usually ends class with pranayama work, and cracks the occasional funny joke. You leave Andrew's class knowing that you did your mind & body good. Since I have been part of the Bamboomoves family, Andrew has been very encouraging, and helpful on my yoga journey. He knew I was reluctant to take the Dharma master class, and he invited me. Taking the Dharma Master class beside him was great, because I probably would have found an excuse to avoid it without the comfort of knowing a familiar face was beside me. Andrew has given me the chance to do a lovely Yoga photo shoot with his talented photographer buddy, getting me to volunteer at the Yoga in Central Park to adjust participants and much more. The giving nature that Andrew brings to fellow yoga instructors and students makes him a phenomenal yoga instructor. Thanks again Andrew for yet another lovely class.
Posted by Ambria of riya yoga at 8:37 PM