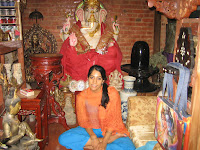 While in the Western part of the world, many people have adapted the "asana" (yoga pose) as their key component of their yoga practice. It is imperative to recognize that this ancient practice is made up of many components, also referred to as the eight limbs of yoga. It is also important to recognize and respect the fact that this ancient practice stems from the hindu religion. While it is arguable that the yoga practice itself is not hindu, the practice has been passed down through hindu religious texts and yogis. Many of the poses are named after Hindu deities, and stories about them. The sound and symbol of Om are a key part of Hindu prayers and considered to be the sound of God/sound of the Universe. Maybe for non-religious people, and those who are devout in their particular faith, it makes them feel better to say that yoga is not religious. Maybe some people worry they will offend people. I find it ironic that Hindu people don't find it offensive that we in the west have adapted their ancient practice and turned it into a workout, branding it, creating an alliance that regulates whether you can be an instructor when in Indian it would take years of dedication to ever be considered a "yogi" or Swami. While it is not important that you be a Hindu when you practice yoga, I think it is a good idea to respect that that is where it stems from.
Years ago, I was invited to sing/cantor the chants with the musical leader who plays various Indian instruments (sitar, harmonium etc) at a Hindu Ahsram right here in NYC. He was in search of a singer and found my music online. He was a converted Jewish gentleman who was called into the Hindu faith and never looked back. Listening to him play and sing, I felt like I was listening to Yesudas (a famous Indian classical musician). I was honored to be asked, but it wasn't something I wanted to do at the time. Recently, I bumped into a lovely girl on the subway (Indra Devi) who was wearing a Salvar (typical Indian outfit that looks like a long embroidered top over pants). We talked on the train, and she explained how she lives in this Ashram. I quickly remembered that I had already been there. She is also formerly Jewish and now devoted to her Hindu faith and guru. We talked a lot, and I was enchanted by the visible essence of peace in her eyes that I find in many devout Hindus. She invited me to join them in meditation at the Ashram. I ventured off to visit the Hindu Ashram right here in NYC on Avenue B again. This compound houses many people who live under the guidance of their guru, Swami Ramakrishnananda. They practice Hatha Yoga, have Darshan, Meditation, Kiratan, and much more. They provide yoga classes for the public and various other workshops. Upon arriving, I was greeted by a young gentleman, former Christian, originally named John who has been renamed as a Saniyasan (like a hindu monk) with a name given by his Guru which I can't seem to remember. He shared with me his experience and invited me to take the Hatha yoga classes as he is the teacher. He was a delight to speak with. I am always fascinated by peoples relationship with God and how it translates into their daily lives. In my opinion all the religions before they are corrupted by leaders have the same values of love for God, love for others, and love for ourselves. Ultimately faith echos in our hearts as John Lennon sings "All You Need is Love". Unfortunately, their guru wasn't coming down for meditation, and instead they were having Kirtan which could go on for hours. I decided to go home, with hope to return. It was nice to sit at the foot of Ganesh (the Hindu deity known for inspiring the no fear mentality). Thank you everyone at the Ashram who greeted me with Love. While my personal faith is not Hindu, and is one that I will keep forever, I will maintain my love and respect for the Hindu faith. Growing up as an Indian, with neighbors and friends of various religions, I was taught to respect everyones right to their individual faith. Ultimately our temple, church or mosque is more than just an architectural structure, rather it is the love in our heart. Gandhi had a famous quote "I am a Hindu, I am a Christian, I am a Muslim, I am a Jew" when he was questioned about his association with Muslims being that he himself was Hindu. If only more people in the world would adopt that loving mentality. If you are interested in the Hatha yoga practice, or even the orthodox Hindu faith, you may want to venture to the Ashram on avenue B.
Posted by Ambria of riya yoga at 8:51 PM