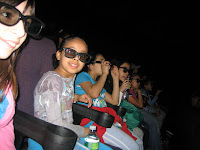 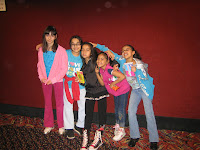 The kids yoga class at Bamboomoves is growing with budding enthusiastic yogis. As we spend time in class exploring poses, singing songs, playing yoga games, and learning about yoga, we acknowledge the positive contributions of fellow students with "YOGI of the Month". As Milta has had perfect attendance, displayed kindness to her classmates, and enthusiasm towards her yoga practice (she even had a one on one private session), she is The "YOGI of the Month" for April. While every kid that comes to Bamboo is a Yogi of the Month, we specially recognize one student each month, to inspire the group and also appreciate each others good efforts in class. From day one, Milta has been a delight to have in class.
As her reward, Milta had the chance to choose the movie for Kids Movie night. We went to see "Alice in Wonderland" in 3D. Saturday after a day of Yoga classes, we ate some pizza, and 5 of the kids from Bamboo ventured in the Excel van to watch the film. Since many kids had already seen the movie, we had only 5 join the highly anticipated event for the Kids. Special thanks to Joe for driving the van, and Julissa's Dad Anthony & Milta's Aunt Isabelle for being fabulous chaperone's.
Movie night was a success! On the way to the studio, we played "Yogi spies with my third eye". The kids were exceptionally well behaved. Congratulations to Milta for earning her orange belt early that day!
Posted by Ambria of riya yoga at 4:59 PM